While setting up VMWare networking you might encounter a problem where only one Virtual Machine has access to the network.
I wasted a lot of time figuring this issue out, hopefully this will help someone.
I tried every possible configuration of VMware networking / vSwitches / Load Balancing etc.
After all that failed I installed a packet sniffer on the virtual machine that had no connectivity.
Here you can see the broadcast packets are being sent out, however, they get no reply.

I also noticed that I’m picking up the broadcasts from other hosts, meaning we are connected to the physical network.

I remembered that in Cali we had the same problem with Cisco switch, blocking multiple MAC id’s on the same port.
This behavior is by design, a “Port Security” feature that Cisco decided to turn on by default on some of its switches.
Here’s the explanation from Cisco website.

To resolve the issue we need to identify the physical switch port  that the NIC is sitting on. Cisco Discovery Protocol (CDP) needs to be ON. This will allow VMWare to identify which switch ports correspond to server NICs. 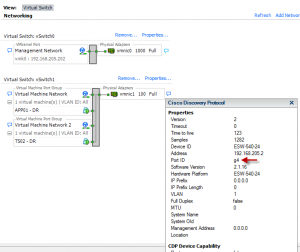 Login to the switch.
On the dashboard, select SmartPorts Wizard
Select the port in question by clicking on it.
Select Switch from drop down, Next, Next on the next window.

If you enjoyed this article, please consider sharing it!